The HP-80 was HP's second handheld calculator. This calculator was designed for business rather than scientific/engineering. In addition to having different functions, it was designed with a different philosophy. Whereas the HP-35 was designed for technical/mathematical users, the HP-80 was designed to be a problem solver that didn't require its users to know the formulas needed. Thus, the user could simply enter the parameters of a business problem and get an answer with a single keystroke. (In other words, the HP-35 user supplied the formulas, but on the HP-80, the calculator supplied them.) 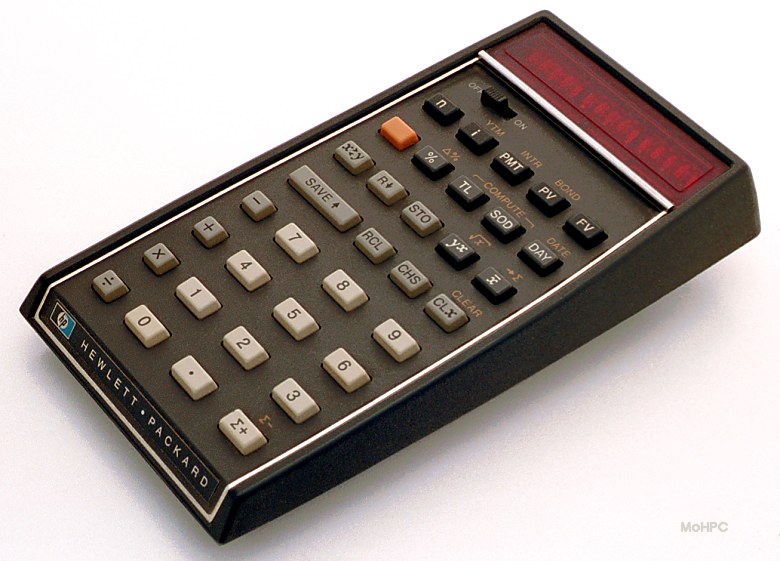 Functions which appeared for the first time included:

The HP-80 used the same basic technology as the HP-35. The major difference is that the HP-80 had 7 256-word ROMs whereas the HP-35 had just 3. Construction, batteries, and dimensions are the same as the HP-35.

The HP-80 replaced the HP-35's xy with yx, relabeled the ENTER key SAVE and was HP's first pocket calculator to have a shift key.

The HP-80 was more luxuriously packaged than its technical predecessor. The silver bar above the on/off switch was actually metal (in early versions) so it wouldn't wear off with use. In place of the simple one piece molded plastic hard case, the HP-80 came with a metal case with leatherette covering on the outside and a fuzzy interior which held the calculator, leather case, quick reference guide and charger.

'When Charles Lamb wasn't writing literary classics, he labored as an accountant for the East India Company. During his dual career —1791 to 1825— he often expressed a dim view of the business of business as it was when the standard calculating equipment consisted of a high stool, desk, quill pen, and a human brain—"I had perpetually a dread of some crisis to which I should be found unequal... I served over again all night in my sleep, and would awake with terrors of imaginary false entries, errors in my accounts, and the like..."

There is little doubt that Lamb's frustration with the burdens of his work sparked his creative genius—had he been content he might never have written anything of lasting significance. (In fact, his retirement from the East India Company marked the end of his productive period as a writer.)

At the risk of depriving the world of another businessman-cum-artist, we have produced a device that takes the drudgery out of complex financial and business calculations—and makes them more accurate, too. The tool is the HP-80 electronic answer-machine that weighs only nine ounces (you can take it anywhere you go—and should), and replaces stacks of tricky tables and other such "inundata". It is the first pocket calculator to offer built-in logic for solving business-oriented problems. There is no comparable tool available today!'

With case (~38K) (Also shows the leather case and charger.)