The HP-45 was HP's first scientific calculator to have a shift key. This was such a novel feature at the time that HP credited the key with nearly doubling the computational power of the calculator. (Advertisement July '73 Scientific American.) 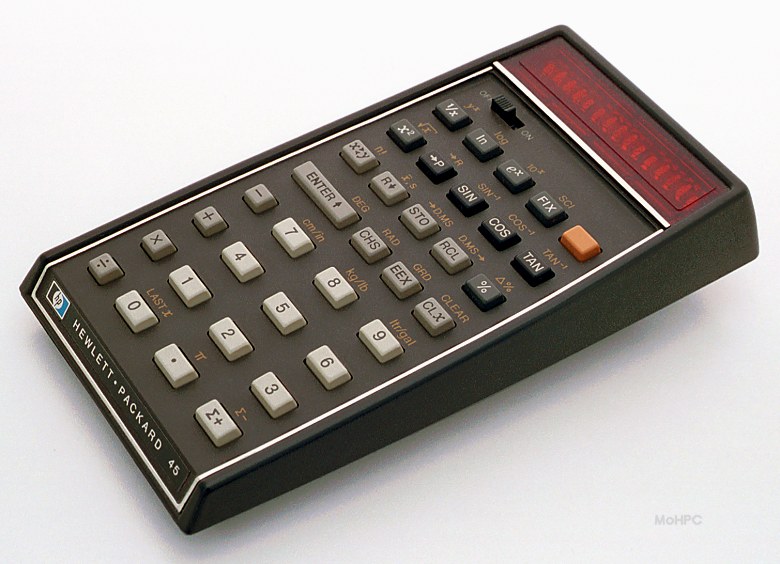 The HP-45 added the ability to do trig functions in Radians or Grads, polar to rectangular conversions, decimal degrees to/from degrees minutes seconds, basic statistics %, % change, n! etc. It was also the first pocket calculator, to have 9 storage registers in addition to the 4 level stack. "(Let your imagination picture the calculating horsepower of this feature for register arithmetic, conversions, continued products, payrolls...)" (Advertisement July '73 Scientific American.)

The HP-45 also added 10x and replaced xy with yx. It also added the now ubiquitous Last X key and x2. The latter was placed on an unshifted key where it makes sense. (So it actually takes one less keystroke to do x2 than Enter, multiply.)

Another feature added on the HP-45, was the formatted display. It added both fixed and scientific displays with a choice of the number of digits displayed. The HP-35 had only what is now commonly called "standard mode". In fixed mode the HP-45 would display sufficiently small numbers as 0. Starting with the 20 series, HPs automatically switched to scientific display when this would happen.

Unlike the HP-35, this calculator had no "clear the entire machine" button. However, its back plate points out that you can clear everything by turning the machine off and then on.

Quotes from the Introduction

"Although your HP-45 might not be as much fun to watch, it makes calculating faster and less arduous, because the operational stack and the reverse "Polish" notation used by the HP-45 provide the most efficient way known to computer science for evaluating mathematical expressions."

And from a bit later in the introduction:

"Incidentally, no calculator available today (including ours) can handle the problem given to our child prodigy. Isn't it comforting to know that people can still do things machines can't?"

The HP-45 had code to implement a timer. This was never exposed as a user feature because the lack of a quartz crystal in the HP-45 made the timer fairly inaccurate. The timer could be invoked by pressing RCL and then pressing CHS 7 8 all at the same time. Once in timer mode, CHS toggled it between running and stopped. Pressing 1-9 stored the current time in that register when the timer was running or recalled the stored time when the timer was stopped. Pressing the decimal point key, brought the calculator back to normal mode with the time still in the display. (Pressing Enter also resumed normal mode but cleared the display.) It's possible to add a crystal to the HP-45.

The HP-45 can be found with "On" and "Off" molded or painted on. Like the HP-80, early versions had a metal strip above the power switch to avoid wear on the silver trim.