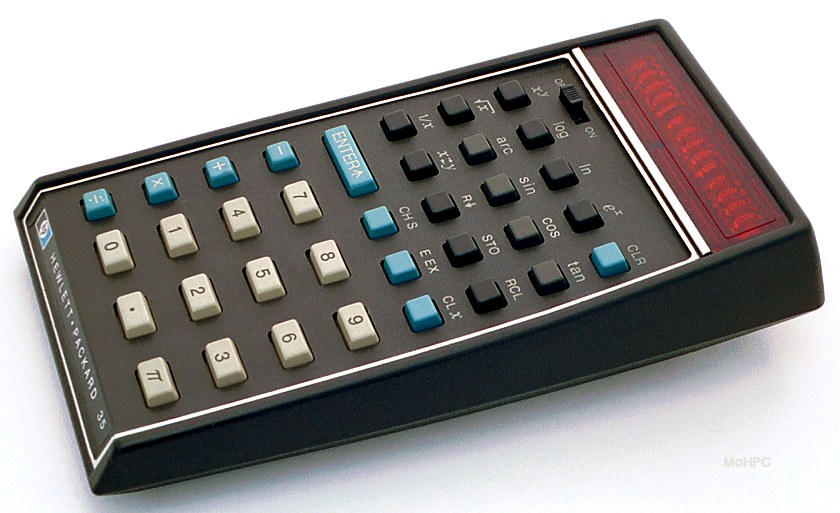 Based on marketing studies done at the time, the HP-9100 was the "right" size and price for a scientific calculator. The studies showed little or no interest in a pocket device. However, Bill Hewlett thought differently. He began the development of a "shirt pocket-sized HP-9100" on an accelerated schedule. It was a risky project involving several immature technologies. HP originally developed the HP-35 for internal use and then decided to try selling it. Based on a marketing study, it was believed that they might sell 50,000 units. It turned out that the marketing study was wrong by an order of magnitude. Within the first few months they received orders exceeding their guess as to the total market size. General Electric alone placed an order for 20,000 units. As a result, they later had to warn people to expect waiting lists in the Hewlett-Packard Journal. This was an unusual situation for HP. While many companies advertised calculators months or even years before you could buy one, HPs were normally available the day the first advertisements appeared.

The early versions said only "Hewlett Packard" on the faceplate and inside HP the product was simply called "The Calculator". Bill Hewlett suggested naming it the HP-35 because it had 35 keys. Later as HP developed more models, "35" was added to the faceplate. The HP-35 and probably the entire HP pocket calculator product line was the sole result of a visionary CEO who chose to ignore the market studies and produce what he felt that engineers would want. His view of the market was that if the engineer at the next bench liked it and thought it would make his job easier, then it was worth doing. The HP-35 was developed in two years, at a cost of approximately one million dollars with twenty engineers. At the time, three to five years was a typical HP development cycle.

The 35 is well-known for having an xy key instead of yx. This makes a lot of sense on the 35 since it didn't have a 10x key. If you wanted the anti-log of a number in x, you entered 10 xy.

The 35 had no true shift key. It did have an "arc" key which inverted the sin, cos, and tan keys. The true shift key was first introduced on the HP-80 business calculator.

This was probably the only HP pocket calculator with a clear everything key. It was prominently located in the upper right corner and probably made adding machine users feel comfortable. This feature was dropped from the HP-45.

The HP-35 allowed the user to press the CHS sign before or during number entry. If a number was in the display as a result of something other than digit entry, pressing CHS negated it, but if the CHS key was then followed by a digit, the calculator assumed the CHS was actually meant for the following entry. Thus, the previous number displayed was pushed onto the stack without the (already displayed) sign change. This feature could be confusing and later models required the CHS key to be pressed after the first digit of a number.

While thorough, the manual was about the size of the quick reference book for a modern high-end calculator. At the time the manual was created there was no calculator or even a model and the drawings were created entirely by hand. The manual was required to fit in a slot in the case and to be thin enough to not transmit any shock to the "delicate" calculator through the package. Ironically, Bill Hewlett dropped the calculator at the press introduction and it was (of course) completely unharmed. Sales people later emulated Mr. Hewlett's accidental demonstration of the robustness of HP calculators. The curator has received countless emails from people who remember HP calculators being thrown or dropped during sales presentations.

From the inside cover:

"HP has now become an acknowledged leader in the field of computational problem solving. Over 10,000 HP programmable calculators and more than 3000 HP digital computers are at work in a wide range of scientific, industrial, and educational applications."

"Now we've coupled our experience in scientific problem solving to bring you a new dimension in personal computing - - the HP-35 Pocket Calculator."

"To give you more computing power, your HP-35 works in a consistent and natural way that may be slightly different from previous calculators you have operated."

From the next section: Shirt Pocket Power

"Our object in developing the HP-35 was to give you a high precision portable electronic slide rule. We thought you'd like to have something only fictional heroes like James Bond, Walter Mitty or Dick Tracy are supposed to own.

The HP-35 has far more computational power than previous pocket calculators. Its ten-digit accuracy exceeds the precision to which most of the physical constants of the universe are known. It will handle numbers as small as 10-99 and up to 1099 and automatically places the decimal point for you. It is the first pocket calculator to provide you with transcendental functions like logarithms and sines and cosines. The operational stack and the reverse "Polish" (Lukasiewicz) notation used in the HP-35 are the most efficient way known to computer science for evaluating mathematical expressions.

The HP-35 was designed with you, the user, in mind. We spent as much time on the keyboard layout, on the choice of functions, and on the styling as we did on the electronics."

The reference to 10,000 HP programmable calculators refers to much more expensive desktop units that HP started making in 1967. The manual also explains the accuracy limits and includes a flow chart for applying RPN to any expression.

The early HPs were built tough and built to be repaired. After removing about a dozen screws you can get to anything in the HP-35.

At the time, many of the companies producing calculators could build adequate circuits and firmware, but didn't have the experience or facilities to make a well-designed housing, keyboard, and display. Many of these brand-X machines were very failure-prone and quite crude in design.

By contrast, the packaging of the HP-35 was of major importance. Its size, looks, keyboard, and display were all carefully thought out. The keyboard is divided into groups with different sizes, color and placement of nomenclature. Even differing amounts of contrast were used to separate groups. (The most used groups had the greatest contrast level.) The keys were made in a double mold process with the legends going all the way through the keys so they could never wear off. The keyboard panel used an HP-developed spring contact which is essentially unchanged in current calculators.

The HP-35, like all the hand-held HPs that followed, was required to remain undamaged after falling three feet onto concrete on each of its corners. The case had sculpted sides, such that the top caught the light and the bottom was in shadow making the calculator look thinner than it really was. All screws were hidden.

Hewlett-Packard Integrity and "The Bug"

The HP-35 had numerical algorithms that exceeded the precision of most mainframe computers at the time. During development, Dave Cochran, who was in charge of the algorithms, tried to use a Burroughs B5500 to validate the results of the HP-35 but instead found too little precision in the former to continue. IBM mainframes also didn't measure up. This forced time-consuming manual comparisons of results to mathematical tables. A few bugs got through this process. For example: 2.02 ln ex resulted in 2 rather than 2.02. When the bug was discovered, HP had already sold 25,000 units which was a huge volume for the company. In a meeting, Dave Packard asked what they were going to do about the units already in the field and someone in the crowd said "Don't tell?" At this Packard's pencil snapped and he said: "Who said that? We're going to tell everyone and offer them, a replacement. It would be better to never make a dime of profit than to have a product out there with a problem". It turns out that less than a quarter of the units were returned. Most people preferred to keep their buggy calculator and the notice from HP offering the replacement.

Six versions of the HP-35 including two different prototypes (~277K) The earliest version, which appeared in public for the first time at the 2009 IEEE Ceremony, has a beige case, no dot on the 5 key and bolder and more blocky lettering. (Notice the π key especially.) This version also has no texturing on the back of the case. Texture was controversial because the more that was added, the harder it was to get the plastic out of the mold. It is believed that Lucile Packard didn't like this case color so the next version was black. It still works, of course! (Note that this is a wide image which your browser may shrink to fit the window. Make sure to expand it to full size if you want to see the details.)

Picture of the second prototype HP-35 (~169K) This version had a red dot to the right of the power switch that showed when it is turned on. It was later decided to change the keys to HP blue to tie in with HP's new logo. A later prototype was made with blue keys and black lettering.

Picture of the third prototype HP-35 (~112K) For this version the keys were changed to HP blue to tie in with HP's new logo. However, the blue keys still had black lettering. Image by Scott Reynolds.

Front view of the middle two HP-35 versions (~76K) These versions omitted the red dot. The newer version on the left added "35" to the label at the bottom.

Front view of the last version of the HP-35 (~55K) This version had all key legends molded into the keys themselves rather than printed on the surrounding keypad.

Picture of HP-35 with leather case and travel case (~75K)

Picture of the all four versions of the HP-35 (~200K) Shown in order from left to right.

Picture of an American back label (~78K)

Picture of a German back label (~48K) Image by David Jobusch.

Picture of a French back label (~81K) Image by Pierre Brial.

Picture of a Spanish back label (~77K) Image by Arnaud Amiel.

Picture of a Japanese back label (~93K) Image by Yoshinori KIMATA.

Picture of a Swedish back label (~58K) Image by Per Faltman.

Picture of a Danish back label (~70K) Image by Johnny Bjorn Rasmussen.

Picture of a Finnish back label (~88K) Image by Velimatti Ollilainen.

Picture of a Italian back label (~120K) Image by Paolo Cipollone.