The HP-27S was another "do-everything" calculator. While it was called a "Scientific Calculator" it also had statistics, Time Value of Money with loans, savings and amortization schedules, plus date arithmetic, time and appointments. Like the first "do-everything" model, the HP-27, the HP-27S didn't do programming. 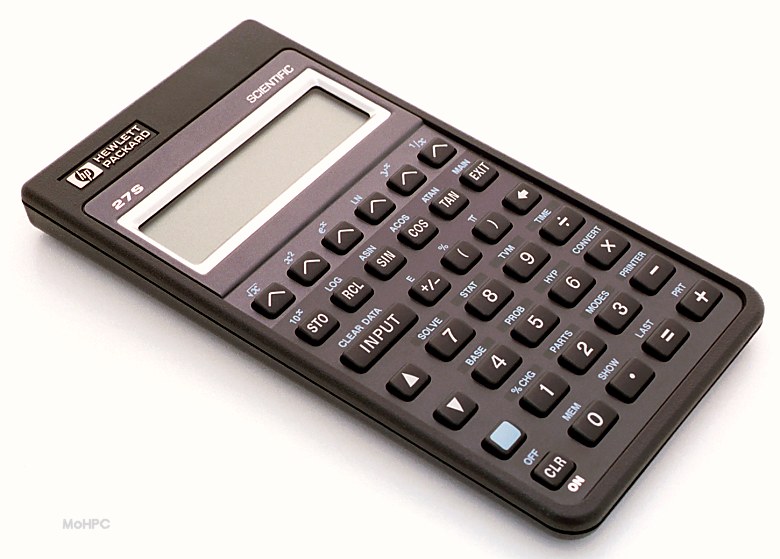 Algebraic (With a Stack)

Unlike its namesake, this model was algebraic. It was the first fully algebraic pocket scientific calculator that HP made. (All of these qualifications are made because HP sold algebraic desktop calculators and desktop and portable computers with algebraic logic.)

The calculator used a rather nice form of algebraic logic in which pending operations were left in the display. For example, if the user pressed 1+2*3, the calculator would show that expression in display. On pressing +6, the calculator would evaluate the part that it now could and display 7+6. Raising numbers to powers used the syntax used in many computer languages like 5^6 (entered using the yx key). Like the majority of algebraic calculators, however, most unary functions were postfix (RPN) so you still typed 5 SIN not SIN(5).

Even though it was algebraic, it also had a four-level stack with roll up and roll down commands (▲ and ▼). This was called the "History Stack" and the equivalent of X on an RPN model was called the "calculator line". The number on the level above could be retrieved into the current expression on the calculator line with the LAST key.