The HP-17B was a pocket business calculator with algebraic logic. This model had an unusually sparse looking keyboard with a single shift key and shifted functions on only about 40% of its keys. Most of its functions were in menus. It had a two-line dot matrix screen like the HP-27S but it always showed a menu on the bottom line. (Usually the main menu with its FINancial, BUSiness, SUM, TIME and SOLVE submenus.) 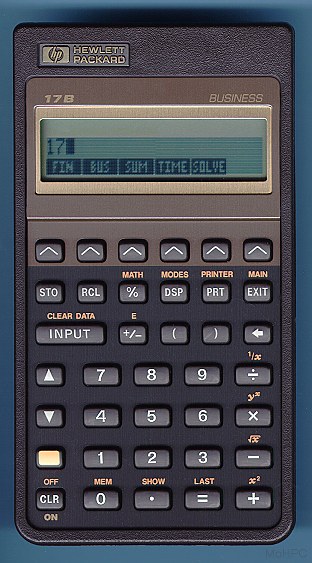 Algebraic (With a Stack)

Even though it was algebraic, it also had a four-level stack with roll up and roll down commands (▲ and ▼). This was called the "history stack" and the equivalent of X on an RPN model was called the "calculator line". The number on the level above could be retrieved into the current expression on the calculator line with the LAST key.