The HP-10 was probably the simplest HP calculator ever made. Not surprisingly its code name during development was KISS (Keep It Simple Stupid.) It was a handheld printing adding machine. 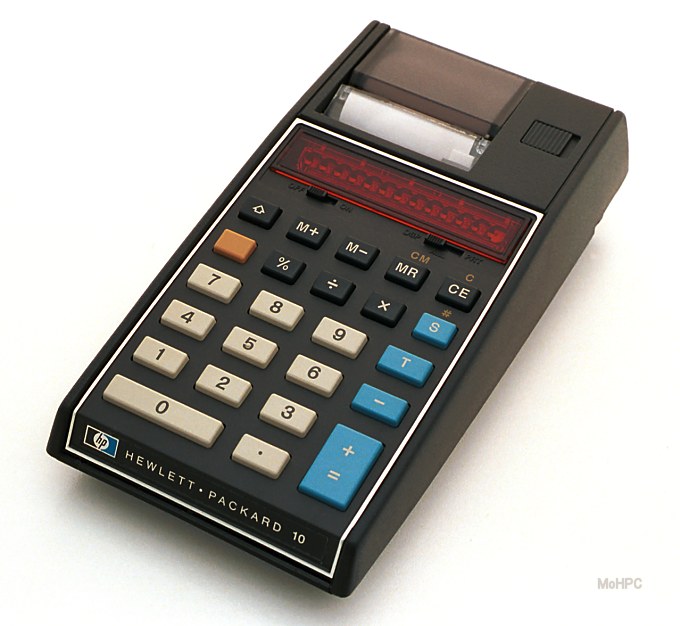 While this mixed logic, may seem strange to someone who has never used an adding machine, it was (and is) quite efficient for computing sums of products, and that's what order forms, inventory forms etc. are.

The HP-10 performed the basic 4 mathematical functions, as well as the percent function. It had one memory register that could be added to, subtracted from, recalled or cleared.

The decimal point could be fixed by pressing the shift key followed by 0-8. Unlike the Fix display mode of other HP calculators, the HP-10 rounded all numbers to the current display format both internally and externally. (For example if 2.25 was displayed, (shift) 1 would display 2.3 and (shift) 2 would then display 2.30.) The shift key followed by 9 produced a floating decimal display. (All digits except trailing zeros displayed.)

A sliding switch could be set to:

A Quote from the Introduction

"The human mind is a paradox. It can store billions of facts and make critical judgements to solve complex problems several times a day; but when it comes to using numbers, civilized man is ill-adapted to work with them. Ask a master chess player to multiply 137 x 23.64, and chances are he'll need a pencil and paper to figure it out.

So, it makes sense in this electronic age to let machines do the arithmetic, the "number-sorting," and let people do what they do best—making decisions, understanding concepts, and thinking up new ideas.

With your HP-10 Handheld Printing Calculator, you have formed a very advantageous partnership. The HP calculator deals with numbers quickly and accurately, leaving you free to concentrate on more important tasks. Since so much of our civilization does deal with numbers, isn't it smart to let a machine do such uninspiring work as adding columns of figures, calculating discounts, and performing long division? Over one million people throughout the world are already using Hewlett-Packard calculators to become more efficient and more productive."

Front View (~47K) The white spot next to the power switch provides a visual indication that the calculator is on even when the display is switched off.