The HP-67 and HP-97 were introduced as a matched set. The 97 had a printer, a larger case and a much larger battery pack. They were otherwise functionally equivalent. An HP Catalog described them as "A major leap forward in fully-programmable personal calculators. These are the most powerful personal calculators Hewlett-Packard has ever made." (Personal Calculator distinguished them from high-end calculators like the HP-9825 and "mid-range" models like the HP 9815.) 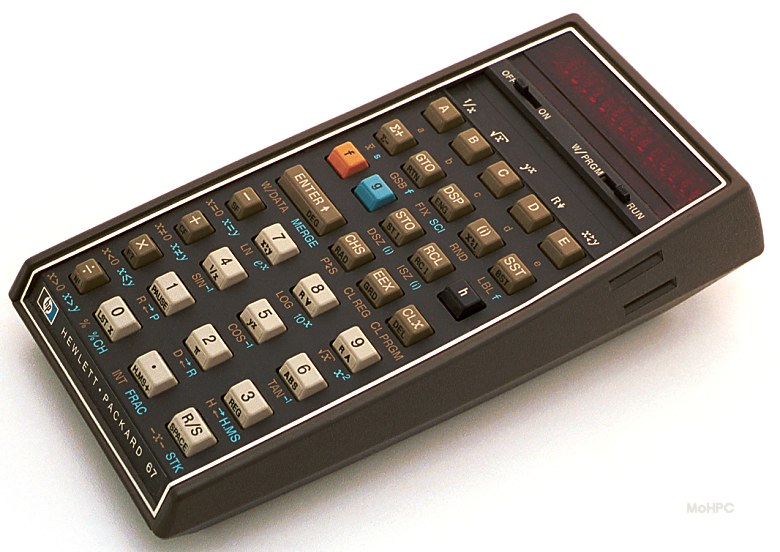 Improvements over the HP-65 included:

The HP-67 packed so many functions on to a small keyboard that three shift keys were needed. The HP-97's larger keyboard needed just one shift. The HP-97 added the same printer introduced in the HP-91. This battery powered printer could print the display, the stack, data registers and programs. Programs were printed with step numbers, keycodes and key mnemonics. It could also be used in trace mode to debug programs.

Indirect Addressing was a particularly important addition giving the calculators, true computer power. Once a value was stored in the indirect register via STO I, it could be used to control store and recall addresses, goto and gosub addresses, format the display, and select a loop counter by using (i) as the argument.

Flag 3 indicated whether data had been entered by the user since the last time it was cleared or tested. This made it possible to write programs like the Time Value of Money solver included in the HP-80. A routine could test the value of this flag and if the user had entered data, the program would store it. However, if the user had executed the routine without entering data, the program would calculate the answer. (See the programming page for more information.)

The HP-67 looked very much like its predecessor, the HP-65. However, both the HP-67 and HP-97 were based mainly on the same technology used in the 20 series. This resulted in a great reduction in cost.

In addition, a new ROM/RAM chip was developed just for the HP-67/97 calculators that contained 1024 10 bit words of ROM and 16 56 bit registers. The HP-67/97 used four of these new chips to provide more storage at less cost than the HP-65's multichip hybrid.

Both calculators were supported by huge program libraries. As of 1977, the applications pacs consisted of: