The HP-92 was HP's second battery powered printing calculator. It was the business/financial model of the series and featured an improved Time Value of Money solver that could compute any of the basic five financial values given four known values. (For many problems, only three known values were needed.) It also provided depreciation using declining balance, straight line, or sum-of-the-years-digits methods and accounted for book value and salvage value. 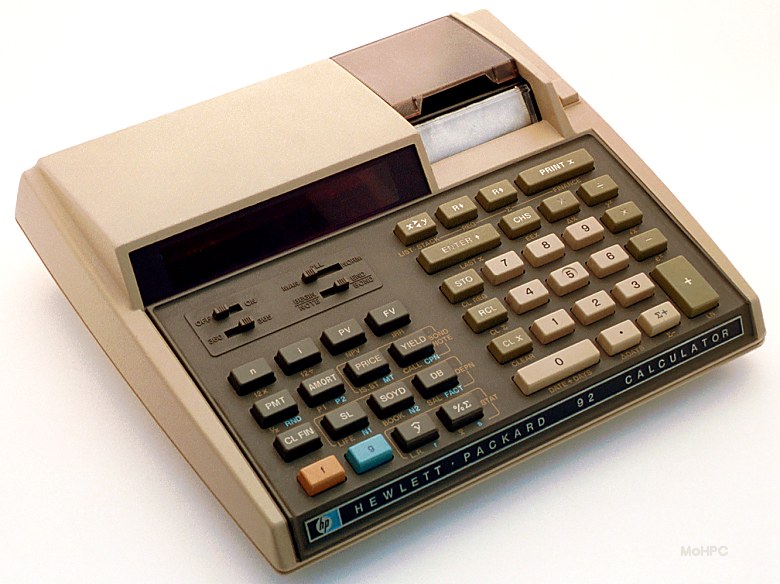 Like the HP-80, the HP-92 included bond price and yield, but it added call price, coupon amount, and issue, settlement and maturity dates. Also new were Internal Rate of Return calculations, and switches to select 365- or 360-day year calculations and begin/end of period payments.

The HP-92 had a large amount of storage space. There were 20 general purpose registers (0-9 and .0-.9), 10 separate dedicated summation registers, and the dedicated financial registers.

The printer was controlled by a three-position sliding switch. The positions were:

In addition, there were a number of keys dedicated to printing:

The HP-92 was based largely on 20 Series technology. In addition, it added LED drivers for the larger display, and a new Printer Interface Control & Keyboard buffer circuit (PICK). Unlike the handhelds, the desktop machines used a light feeling keyboard well suited for rapid data entry on the desktop.