This small but powerful calculator was designed to be software compatible with the HP-41C. It lacked the HP-41C's expandability but it offered, a two-line dot matrix screen with customizable menus, greater speed, smaller size, and a lower price as compensation. 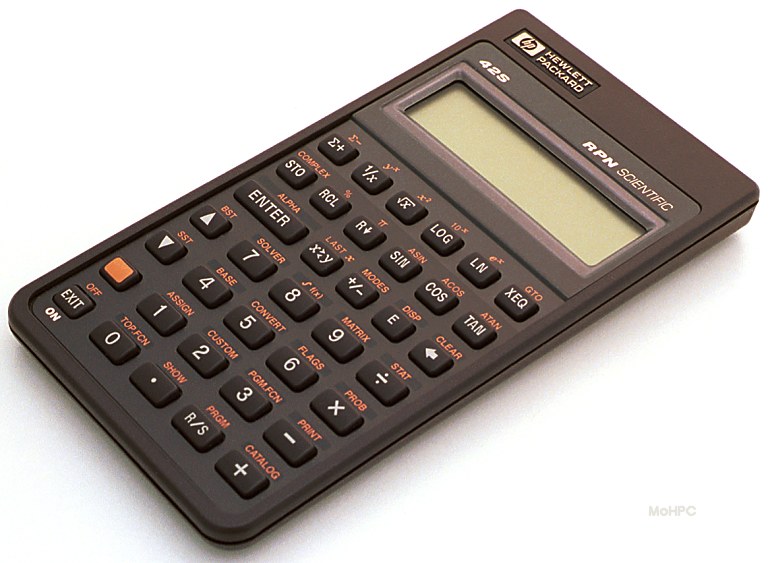 The calculator had over 600 built-in functions. Obviously, many of these were not printed on the keyboard but could be accessed by catalog, by typing their name after the XEQ key or by assigning them to the custom menu. Functions included:

The HP-42S had numbered storage registers and named variables. Initially, 25 numbered registers were allocated but this number could be changed to use as much memory as the user required. (Only registers numbered 00-99 could be accessed directly. Higher numbers required indirect access.)

The calculator also had named variables. When STO or RCL was pressed the catalog of variables was displayed. The variable could be selected from the menu or typed alphanumerically. (Or two digits could be entered to select a register.)

Variables were more powerful than registers because they could hold complex numbers and matrices. (However, the registers were really just a matrix named REGS so the user could make all the storage registers complex.) Strings were still limited to 6 characters as on the HP-41C when stored on the stack, in a register or a variable. Strings of up to 44 characters were allowed in the Alpha register.

The calculator had a sophisticated menu system. Multiple line menus could be traversed by using the up/down keys. Mode settings were indicated by a square dot. Menus could lead to submenus and where most Pioneers had a clear key, this model had an EXIT key to return to the previous menu.

Like several earlier Pioneers, the HP-42S allowed alpha data to be entered via an alpha menu. Characters could be typed into the Alpha register, used to specify a variable name or a program label or entered as program instructions. The Alpha register held up to 44 characters. ASTO and ARCL was used to move data between the alpha register and other registers and variables.

Complex numbers were integrated into the calculator such that they appeared naturally when required (for example the square root of a negative number.) Each complex number required a single stack element or variable and was display like X iY. To enter a complex number, two real numbers were entered and COMPLEX was pressed to convert them to a single complex number. A new feature on this model allowed both polar and rectangular forms of complex numbers.

Matrices could be real or complex and matrix functions included:

Programming was essentially the same as the HP-41C with the following exceptions. Indirection was achieved via the IND modifier. For instance to store the number in X in the register indicated by the value held in register 12, the user would press STO . IND 12. (The . brought up a menu of storage locations including the IND item.) Variables and the stack registers could also be used for indirection so a sequence like STO . IND ABC was also allowed. Some extensions of the HP-42S such as its larger display, larger alpha register, greater numeric range and precision, and its support of complex numbers could cause problems for a few HP-41C programs, (The latter could be worked around by disabling complex results.)

Internal picture showing PCB attached to keyboard attached to front of calculator (~53K) Note CPU held in place by plastic backbone. Batteries and IR transmitter are at the top. Image by Paul Brogger.

Internal picture showing other side of PCB with the CPU visible through the center hole (~74K) Image by Paul Brogger.