The HP-94 was an industrial hand-held computer meant for data logging chores on the factory floor. It was packaged in a squarish form factor, with an ABC format keyboard, a 20 character by 4-line backlit LCD display. The battery pack screwed on to the right side and also served as the grip with an elastic band to help avoid dropping the unit. It had a serial port and a port for a bar code wand and an earphone could be connected for environments where the HP-94s loud beep couldn't be heard. The unit also featured timers, a real-time clock and had a lithium backup-battery. 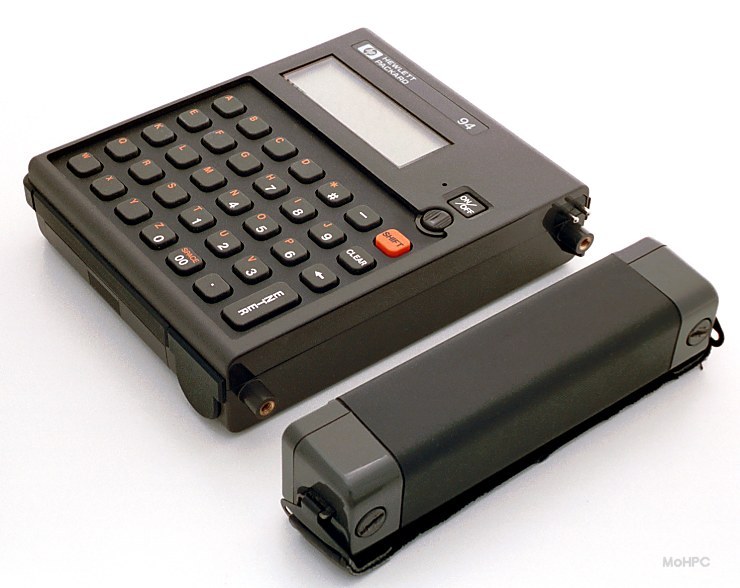 The computer was based on the NEC V20 (8088 compatible) processor but the computer was not PC compatible. Programs were developed on another computer in assembly language or BASIC and then downloaded to the HP-94.

The computers had file systems residing in ROM and RAM. Five user directories could hold programs of types

Assembly (A)
Either new BASIC keywords or complete assembly language programs.
Basic (B)
Files containing BASIC tokens to be interpreted by the built-in interpreter. BASIC source code files were converted to tokens before downloading to the HP-94.
Data (D)
Data of any kind.
User-Defined Handler (H)
An assembly language program for controlling IO ports. Similar to a device driver in other operating systems.

When the HP-94 was cold started it searched the directories in order (0-4) for the first program file named MAIN and ran it. Otherwise, it issued an error message and entered command mode. (The machine cold-started when turned on unless it was last turned off by a program using the warm start option.)

Operating system functions were called by loading a function code into AH, loading other parameters into registers and issuing software interrupt 1AH. Results were returned to the caller in various registers. Functions were:

The OS supported 16 I/O channels which could be opened with the open function or the BASIC OPEN # statement. Channels 0, 1, & 2 corresponded to the Console, serial port and bar code port. Channels 3 & 4 were reserved and channels 5-15 were for date files. (For channels 1-4 the file name specified a user-defined handler.)

Assembly language programs were typically developed with standard Microsoft tools (MASM and LINK). Basic Programs were compiled to tokens which were then interpreted by the built-in interpreter.

The 20 character by 4-line display could be backlit by pressing and holding the shift key until the green backlight activated. This light would remain for several minutes or could be canceled by holding the shift key again. The contrast was controlled by a little knob below the on/off switch. While it was basically a character display, programs could set individual columns of dots within a character and the HP-94 allowed 32 characters in the font to be redefined. These characters were defined in a file that had to be named SYFT.

The keyboard was of the rubber membrane style and quite unusual for an HP calculator or computer. (See Manufacturer below.) Oddly, unshifted characters were printed in orange (the color of the Shift key) and shifted characters were printed in white. The Shift key was a toggle, however it was always set back to the default state when Enter was pressed.

Because the On/Off switch was under software control, there was a small recessed reset switch to its immediate left.

By itself, the HP-94 did little. The applications were developed on another computer. If no application named MAIN existed in the machine, or the user held down CLEAR and ENTER while turning it on, it entered command mode and accepted commands such as:

Unusual for HP, the production of the HP-94 was actually done by an outside company. The units were produced in Japan by Canon.

The HP-94 appears to have been a flop. HP sold only a few and ended production. What they apparently failed to realize was that the few sold went to developers. Because the unit could do little on its own, companies bought just enough for developing and testing and when their applications were finished, they went back for more units - and found that they could get none. (This story has happened over and over in the custom computer market and explains why some companies will only develop their applications on generic PCs.)