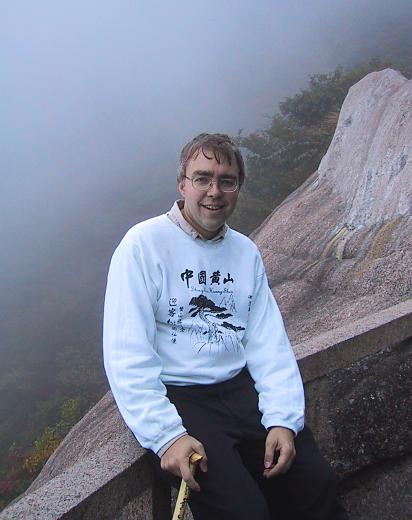 I grew up in Michigan USA, went to the University of Michigan where I studied Electrical and Computer Engineering. After school I moved to the west coast to work for Intel. While at Intel, I worked on real time operating systems, device drivers for many operating systems, application sharing & conferencing and speech recognition and natural language. I got to take several trips to China while working on speech and natural language and continued visiting for fun. Lately I'm studying Chinese. I hope to someday be able to speak as well as a two-year-old.

Besides HPs, my other interests include science fiction (in general and Doctor Who specifically) photography and high power rocketry. (That rocket does fit in the car after being broken down.)

I also fly RC airplanes, drones, and helicopters. I'm part of an "aerobatic team" of 5 people who fly identical jets through "Blue Angels" type routines. On a good weekend we do great. On a bad weekend 3-4 people have to rebuild their airplanes - sometimes we will just bump in the air, but in the excitement and confusion, two pilots believe they are flying one of the bumped planes and no one flies the other plane, so it survives the bump but not the ground.

My fascination with HP Calculators began in 1972 when I came across one of Hewlett-Packard's "Some things are changing for the better" advertisements in Scientific American. It was a simple one-page black and white ad for the most amazing product I had ever seen. The text began with "When you first hear about it, it sounds like an electronic slide rule, the kind that's been available only in science fiction." It was an incredible device and it only cost $395.

There were just two problems:

At $3 a week, my HP was going take a while to acquire. This turned out for the best however, because as my savings slowly accumulated, HP came out with even more fantastic models. The HP-45 added to the features of the HP-35 and the HP-65 was simply unbelievable. (I'm still amazed that anyone had the audacity to put a motor-driven magnetic card reader in a pocket calculator - and in standard HP style, it even the sound it made was impressive.)

When the HP-25 was introduced in 1975 my savings and HP prices finally intersected. I used nearly my entire savings to buy it only to receive a letter from my grandfather the next day containing a check for half the price. He had seen an ad for the HP-25 and had independently concluded that it was the calculator for me. Obviously I was destined to own that calculator.

I loved the HP-25 and still do. Everything was perfect. The calculator was rock-solid, perfectly shaped for my hand and smaller than calculators with one tenth of its capabilities. The manual was also a joy. It started by having you enter a program before teaching the basics so you'd know right from the start how easy it was going to be. Story problems involving "lovesick sailor Oscar Odysseus" and the world's largest pizza assured that it never became monotonous.

I've been buying HPs ever since. In my senior year in high school I wrote a Star Trek program for my new HP-67 and from that point on, any time I needed my calculator, I had to hunt it down. (In my high school in 1976, if you wanted to program a "real computer" you punched cards and sent them off to be run at night only to find pages of error messages the next day.) My HPs got me through college in Ann Arbor Michigan and my HP-16C has been a trusty companion in my work.

The Beginning of the Museum

In 1994, I realized that I still felt that I had missed out on the HP-35 so I searched and finally found one in nearly new condition. Then I decided that the HP-65 was also a missed opportunity and I just had to have one of those too. And that timer feature of the HP-55 was pretty cool. (You can see where this is going can't you?)

In early 1995 I was working in a lab developing new applications for Intel computers. I thought that this new web/HTML thing might just be the "next big thing" but many of my coworkers thought it was a passing fad. I decided to learn a little HTML on my own time by putting my collection of early models (scientific models from the classic and 20 series only) on the web in the form of a museum because, well, no-one else had done it. I was immediately deluged with email from fellow HP calculator lunatics who loved my museum but wanted to see more. What about the HP-41C? The 30 series? I gave in to the Internet masses and sought out every HP calculator made and updated the museum in roughly chronological order.

With the help of the Internet I managed to add calculators from Argentina, Norway, England, Australia and all over the U.S. to my local finds. Most of this happened before eBay existed so finding them was a bit harder but the prices were generally much lower.

Many of the new gadgets of the 1970s fascinated me. In 1976 while in High School, I built an Altair Computer based on the Intel 8080. Some people couldn't understand why I was building the computer when I already had the HP. That was a reasonable question given that the computer, when first built, had no memory, no storage and only lights and toggle switches for binary input and output. Once I built and installed the first memory card, I was able to enter a program from the manual that added 2 numbers together. (With the limitations that the numbers and the result had to be less than 256 and you had to convert them to and from binary by hand.)

Over the years, however, the computer continued to expand. I added 24K of memory (192 1 kilobit chips), a simple video display, a keyboard and a "tape drive". The "tape drive" was a common audio cassette recorder hooked up to a kludge of a modified modem card connected to a serial port card allowing programs to be saved and reloaded from audio tapes at a brisk 30 characters per second.

Eventually the tape drive was replaced by floppy disk drives (both 8" and 5.25") and a primitive printer was added. This was my main home computer for over 10 years, going through several operating systems and languages and quite a few applications. I earned money for many of the parts by writing software. The computer still works but is mostly a display piece now.

Back in 1976, building my own computer was unusual enough to get written up in the school newspaper and to have the computer class take a field trip to my home. Later, in college, I told one of my teachers that I solved programming problems on my own computer and then uploaded them to the overloaded school mainframe (via a 300 baud modem and my own communication program) only as a last step. He didn't believe me until I showed him. Times have certainly changed.

My very first "computer" was a Digi-Comp 1. This little plastic computer was sold by Edmund Scientific for about $6. It could do only the simplest things - just enough to get me interested.

LED digital watches were another amusement but I spent too much money on calculators and computers to actually afford one at the time. Fortunately, I was able to buy several dozen of the most interesting models for around a dollar each after they became unfashionable but before they became a collectible.

After building the Museum, I decided I wanted to do another site, so one of my other interests — Doctor Who — was selected. After looking around I saw that there were a great many Doctor Who sites and "yet another one" would be redundant, however, I didn't see anything at all on the net about Doctor Who toys. If you want to see something completely different than HP calculators, you are invited to visit The Skaro Toy Museum.