The HP 9830A was the most powerful model of the original 9800 series calculators. It greatly blurred the lines between traditional computers and calculators due in part to its use of the BASIC programming language and options such as terminal emulation and a hard disk drive. 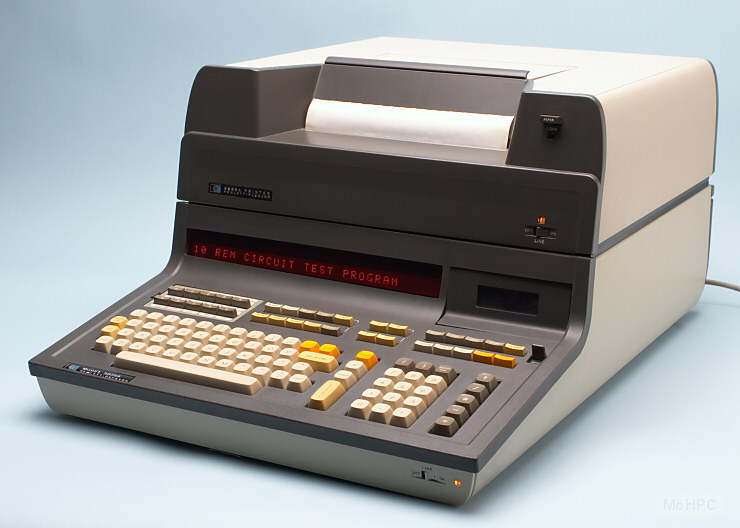 Even though it was programmed in basic, the HP-9830 could be used like a normal algebraic calculator. An expression was entered and the Execute key was pressed. Expressions were like those of the BASIC language with precedence and parentheses but no implied multiply like the HP 9820A. The Result key could be used to fetch the previous answer into the current calculation. The Recall key fetched the previous expression itself so it could be inspected or edited. The user had full access to the BASIC variables - even arrays - while doing manual calculations. The full complement of functions, comparisons etc. was also available.

An unusual feature was "simultaneous calculations". The user could enter multiple expressions separated by commas or semicolons and the calculator would display the answers to all of them on the display (subject to its 80-character limit.)

The calculator could be expanded with up to 8 additional ROMs. (Three were internal and could be installed by HP field personnel and 5 could be plugged in by the user.) Available ROMs included:

In addition to the ROM blocks mentioned above, there was also a terminal emulator ROM. This ROM allowed any text to be stored in memory so the user could edit programs written in other languages for later uploading to another computer. The terminal ROM supported modems up to 300 baud which was considered quite speedy at the time. (In fact, the curator remembers being told around 1974 that 300 baud was near the theoretical limit for telephone lines.)

Up to 5 ROMs could be plugged in behind the display on the left side of the machine. Four additional slots in the back accepted the same option cards used in the HP 9810A and HP 9820A calculators.

Perhaps the most exciting expansion option were the HP9880A/B hard disk drives. These drives stored 2.4 megabytes per 14" platter. (The A model had one platter and the B model had 2.) The caching disk controller was very flexible allowing up to 4 disks and 4 calculators to be attached to a single controller. A ROM module provided additional BASIC commands for using the disks. Besides the obvious commands, the ROM allowed the user to "chain" to a program on disk keeping the variables from the original program, copy cassette tapes to disk, get/save key definitions from/to disk files, read/write matrices from/to disk, password protect files etc.

The exterior design was similar to the HP 9810A and HP 9820A. However, where the other two models had a slot for inserting magnetic cards, this model housed a cassette tape drive. Its 32-character alphanumeric display was twice as long as the one used on the HP 9820A. (The display scrolled to allow lines up to 80 characters long.) This model omitted the 16-column built-in printer under the assumption that BASIC programmers would probably prefer to add the 80-column external printer which is shown in the picture above.

The other major physical difference was the HP 9830As QWERTY keyboard. Most commands were entered by name as on a computer. In addition to the QWERTY keyboard, there were 10 user-defined keys with user-labeled overlays, 10 editing keys, 4 cursor keys, and 10 more special purpose keys for loading and storing programs etc. Like many computer keyboards of the time, End of Line and Execute functions had separate keys. There was also a numeric keypad with keys dedicated to the basic math functions.

Many HP 9800 peripherals were also available.

Next (high end) Calculator Made