However, three features of HP's earlier top calculator, the HP-41C, were lost - expansion ports, a completely hand-optimized form factor and a fully reconfigurable keyboard. As the model number suggests, the HP-48SX combined the general expansibility, flexibility and form factor of the HP-41C with the advanced math and programing features of the HP-28C/S and added new features of its own.

To understand the HP-48S/SX, the reader should first visit the RPL page. Many of the HP-48's functions are described there. The HP-48 also included almost all HP-28C/S features which are not repeated here.

The HP-48S/SX had a large 64 × 131 pixel display. It typically showed the current directory at the top, followed by four lines of the stack. At the bottom was a row of labels for the top row of soft keys. The large screen made plotting as well as features like the Equation Writer and the Matrix Writer more useful. A plot with plot-related soft key labels is shown.

Though makers of algebraic calculators had claimed for nearly 20 years that their calculators allowed entry of expressions just as the were written on paper, this was never quite true. Early models were only vaguely "algebraic" but by the 90s most "algebraic" calculators could at least honestly claim that users could enter an expression in the way it would be typed into a compiler. The equation writer application finally allowed expressions to be entered and viewed just like they would be written on paper. 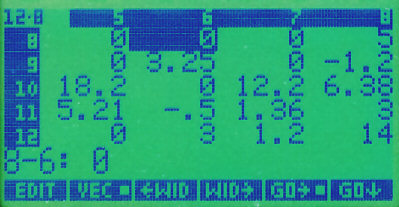 The Matrix Writer application provided a convenient way to create and manipulate arrays. The screen looked much like a spreadsheet with a window of 5 rows by 4 columns which scrolled in both directions as needed. The column widths could be changed with the WID soft keys. Other capabilities included inserting and deleting rows and columns, reading and writing elements from the stack etc.

To enter data, the user moved to each cell, typed the data and then pressed Enter. A second press of Enter saved the matrix on the stack. To edit an array on the stack, the user pressed the ▼ key which entered the Matrix Writer with the array from stack level 1 loaded.

On the HP-48SX, units could be attached to numbers and problems could be solved in a natural way. For example, to add 40 feet/sec to 20 MPH, the user could press: 40 UNITS LENGTH FT which would leave 40_ft on the stack. Then the user would attach the seconds by pressing UNITS TIME ↱ s leaving 40_ft/s on the stack. The ↱ caused the seconds to be divided instead of multiplied. (Note that ft/s could also be found on the SPEED menu but it was avoided in this example to show how units could be built up from more basic units.)

To know how many feet had been travelled at 50 MPH for 20 seconds, the user could enter 50_mph and then multiply by 20_s which would leave 1000_mph*s. To express the answer in feet, the user would press: UNITS LENGTH ↰ ft leaving 1466.66_ft

The Units catalog was extensive including unit prefixes such as m (milli), n (nano), and a (atto) and the user could also create user-defined units which were defined in terms of the existing units

The Solver was fully unit-capable as well. To solve for a variable when the data had units, the user entered an initial guess including the desired units.

Rather than an HP-IL-based network, the HP-48S/SX included a serial port. PCs and serial ports had become well-established by this time. (Another company made a 3.5" diskette drive that could be accessed via the HP-48's serial port.) Serial port configuration was typically quite complicated at the time. The standard RS-232 port used a 25-pin connector and connecting devices would frequently require crossing certain pairs of signals or looping them back. The HP-48SX attempted to minimize this confusion by using only three wires (transmit, receive, and ground) and using the most common soft handshaking. The I/O menu made setting such parameters as baud rate, parity etc. easy.

The HP-48SX extended the infrared output ability of earlier models to allow input as well. This allowed calculators to talk to each other and allowed some unusual applications such as motion sensors. HP limited the range of 2-way communication at the request of teachers who were nervous about invisible message passing.

The HP-48SX included two expansion ports. RAM cards were available which had internal batteries to preserve data and programs even when removed from the calculator. A sampling of the ROM cards available from HP and third parties included:

It was also possible to have custom software burned into cards.

By the time the HP-48 was introduced, the Internet was well established in universities and high tech companies. The combination of sophisticated programing in a small and relatively inexpensive package plus a serial port for easy program up/downloading led to a huge HP-48 Internet culture. First, an HP-48 newsgroup (comp.sys.hp48) appeared and later many world wide web sites devoted to the calculator appeared. The available programs were (and are) very diverse, covering all the areas one would expect and also including such unusual calculator programs as:

Differences between the Models

The HP-48SX was introduced first. The HP-48S was introduced the next year as a lower cost version. It had all of the HP-48SX features except for the expansion ports. Both versions used a Saturn architecture processor.

Back three quarter view of both models (~64K)